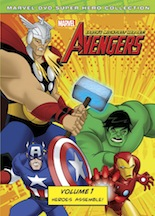 As a mom of boys, I hear often about superheroes and superpowers.  Marvel heroes are the favorite among my boys and boys I know.  That is why I was super excited to be able to review the AVENGERS DVD releases of Volume 1 and 2. 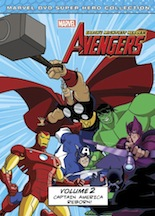 Featuring your favorite animated Super Heroes – Iron Man, Thor, Captain America, and The Hulk – The Avengers: Earth’s Mightiest Heroes! sees planet Earth threatened by Super Villains, time traveling conquerors, alien invaders, mythical beasts and rampaging robots — all bent on the total destruction of humanity. Unfortunately against these impossible odds, no individual hero has the power to save the world and just when all appears to be hopeless, the most skilled champions in the Marvel universe join forces to form the mightiest Super Hero team in history. The Avengers come to the rescue when the fate of the world rests on their shoulders.

Johnny specifically LOVES this series. We have one of the volumes in the van and the other he watches at times in the house. He tells me all about the “cool” superheroes and who all of his favorites are. If I were to guess, I would say that he has wanted to watch the AVENGERS DVDs more than any other as of late. He has even taken to running around the backyard pretending to be his favorite Marvel superhero.

Both Volume 1 and 2 can be purchased for $19.99 and they are well worth the cost if you have a young boy. They are rated TV-Y7 but Johnny is 5 and does well with them (use your own judgment). My nearly-10 year old stepson also enjoyed them and probably understood more what was going on. We love this series and I would consider giving it as a gift to a superhero fan as well.

Disclosure: We received the products mentioned for the purpose of review. All thoughts and opinions are my own.