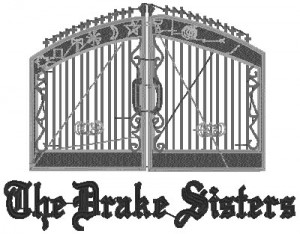 I love you guys!  I really, really do!  Back in August, I wrote a post about a book series called the Black Dagger Brotherhood.  I had totally forgot about that post until this past week when two of you contacted me out of the blue about the post and books.  I love to read; I read a ton!  So, thanks to your enthusiasm about that post, I am going to start sharing more about what I read in hopes that it will help you guys out to find new books.  I know how hard it is sometimes to find good books and I love to talk about reading and books so this will hopefully be a win/win for us both!

After reading the Black Dagger Brotherhood series, I felt a need for more paranormal romance.  The series I wanted to talk about today is called the Drake Sisters series by Christine Feehan

.  While not my favorite series I have read, they were good and a quick read (what I call popcorn books).  The books are about a group of sisters, 7 of them.  Each book focuses on a different sister but they all have rolls in each book.  I was immediately drawn to these books because one of the sisters is named Joley (like my baby!) and I didn’t realize that until I was half way through the first book.  Very cool in my opinion.

The sisters all have special paranormal gifts, from being able to make people speak the truth to talking to animals.  The books offer romance and paranormal in each.  I felt that a few were better than others but it is because I liked some of the sisters more than others.  The sisters were raised in a house that has special gifts all of its own (one being that it only allows in the future mate of the sisters).   These are not near as racy as the BDB books but they do have some steamy parts so be forewarned there.

My favorite sister was probably Hannah.  She is the youngest and the one that is going to have 7 daughters of her own and live in the Drake house.  As the story goes, each youngest Drake daughter will have 7 daughters of her own that carry on the gifts of the family.  Hannah is the one that can control the wind which turns out to be a huge plus with these trouble-bound sisters.  I like her spunkiness and determination.

Overall, I am glad that I read these books.  I read them after another series called the Ghostwalker Series

which I will write more about soon!