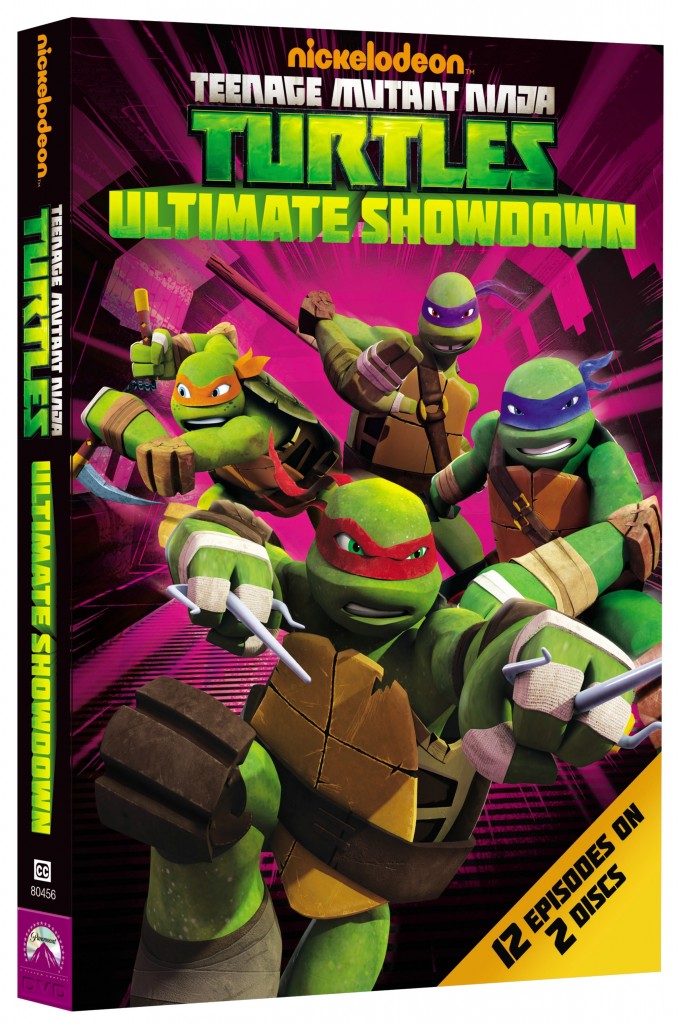 I thought Johnny was going to leap out of the car when I showed him the latest movie that showed up at our door. I brought a copy of Teenage Mutant Ninja Turtles: Ultimate Showdown with me when I picked him up from school. I asked him how his day was and how he behaved. His friends were in the car with us too and agreed that it was a “good day”. I told Johnny I had a surprise for him and showed him this DVD. He screamed, started clapping, and he and his friends were high-fiving each other. I guess they love TMNT.

Since that time, Johnny has watched this DVD several times. He loves it. But, not only that, he loves the Lego Comic Book that was included in the packaging (available for a limited time). He sits and reads it over and over. I have asked him repeatedly what his favorite episode was on this DVD set but each time he gives me a different answer. When I asked him a final time and informed him that he keeps giving me a different answer, he calmly told me that it is because “they are all so good”. Well then.

The finale has to be the best part in my opinion. This is a special two-part episode, aptly named The Ultimate Showdown. What will you see? You will find the ultimate showdown against the Kraang and the Shredder himself. I don’t think you can ask for more than that!

Disc One
I, Monster
The Turtles must face off against a new enemy, The Rat King, who threatens not only to take control of the city, but Splinter’s mind as well.

The Alien Agenda
The Turtles get their first taste of high school when April’s school project draws Kraang attention.

The Pulverizer
The Turtles meet their first fanboy when a teenage wannabe hero decides to fight crime and dress up as “The Pulverizer.”

TCRI
While breaking into the hostile environment of TCRI headquarters, the Turtles discover the true intent of the Kraang and resolve to stop the alien invasion once and for all.

Cockroach Terminator
As the Turtles try to foil a Kraang invasion plot, they are hunted by a giant, indestructible cockroach.

Baxter’s Gambit
Fed up with being humiliated by Fishface and Dogpound and defeated by the Turtles, Baxter Stockman seeks revenge by luring both parties into a deadly labyrinth.

Disc Two
Enemy of My Enemy
After witnessing the Kraang in action, Karai realizes the seriousness of the alien threat and approaches the Turtles to propose an alliance.

Karai’s Vendetta
While the Turtles are infiltrating an undersea Kraang base, the Foot Clan attempts to capture April, forcing her to fend for herself in a battle of wits against Karai.

The Pulverizer Returns!
When Shredder schemes to create a fearsome army of mutants, the Turtles have no choice but to rely on the help of the newest recruit to the Foot Clan: The Pulverizer!

Parasitica
After Leonardo, Raphael, and Donatello fall under the control of a parasitic Wasp, Michelangelo must fight his brothers to save them.

Operation: Break Out
Donatello breaks into a secret Kraang detention center in order to rescue Kirby O’Neil. But when he discovers they are trapped inside with a deadly mutant prisoner, he realizes that breaking in was the easy part.

Showdown – Part 1 & Part 2
As the Turtles make a desperate assault on TCRI to shut down an alien portal, they find themselves engaging in the most difficult battle yet.

I have one copy of this fabulous DVD set to give away to one of you! If you live in the US, be sure to enter. The first entry is mandatory and requires a comment below. Please don’t skip that or all others are invalid.