When the Christmas season came upon us, there were only two things my son wanted. He is past the point of really having many toys he likes; video games are his thing. He has been playing the Disney Infinity my parents bought for him for his birthday last year and decided he wanted Disney Infinity 2.0 this year. We were so thankful to be sent a copy for review and below you will find our thoughts and opinions about this new game. 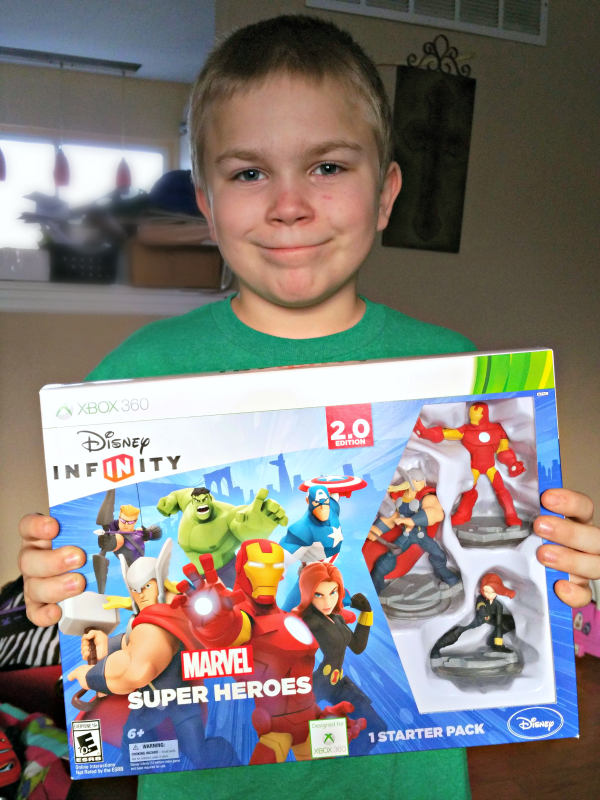 Disney Infinity 2.0 edition is, in my opinion, made for both boys and girls. No need to worry if your little girl will enjoy this game because there are so many characters to choose from. Johnny wanted this specifically because he loves Marvel Super Heroes and that is what you get with the starter pack for XBOX 360, the platform he plays this game on. Joley is excited to see some Disney princesses available for this version as well as being able to play with the characters she loves from the original Disney Infinity.

Let’s start by talking about all that you get with the Disney Infinity 2.0 starter pack…

You get the game (duh!) for whatever platform you buy. It is available for Sony PS3, Sony PS4, XBOX 360, XBOX ONE, and Wii U. You can also play on your PC. You can get the Toy Box Starter Set and also special edition sets for Playstation as well.

Next we have the characters. With this starter pack, we received Thor, Iron Man, and Black Widow. You can use the included Web Codes to unlock your Disney Infinity Character Figures digitally on your PC, iPhone, or iPad. You will also find the Avengers Play Set.  With that you can play as the Marvel Super Heroes and “stop Loki’s cold-hearted plans to freeze New York City – and the world”! 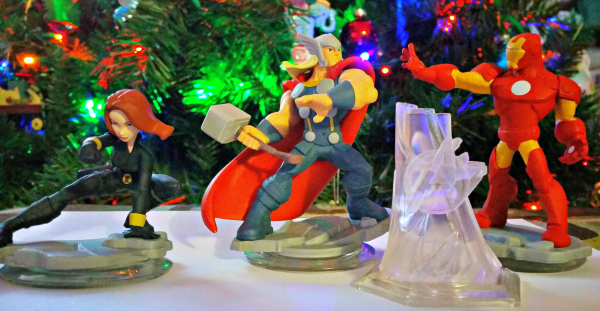 You will also receive two 2 Toy Box Game Discs that unlock replayable adventures in the Toy Box! These include “Escape from the Kyln” and “Assault on Asgard.” 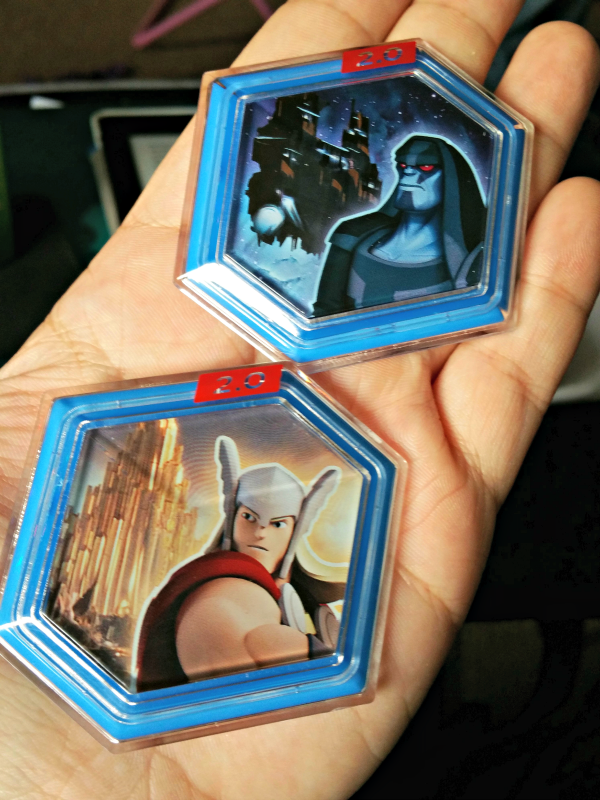 You will receive the Disney Infinity base that plugs into your gaming system via USB.

My kids were all thrilled by the included poster that showed all the characters and discs available for the 2.0 game. They crowded around it deciding what characters they “had to have” next. 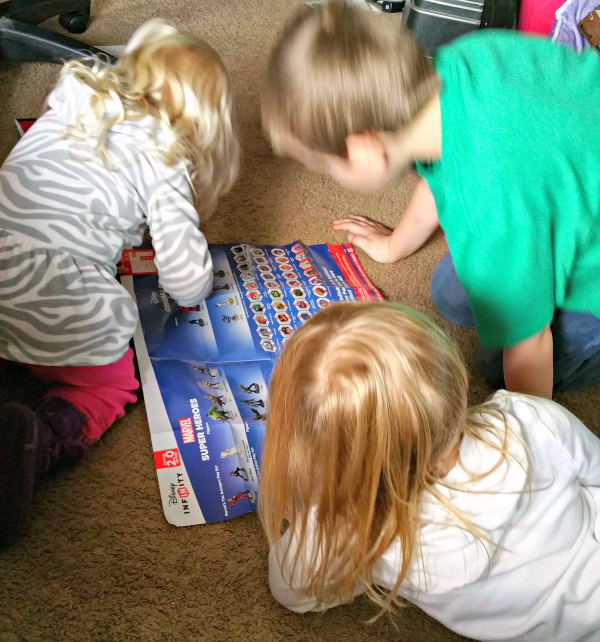 My husband was able to hook the game up really quickly (like super fast and your kids could even do it!) and the kids started it up. they were greeted with a Disney Infinity logo. This is when the whoops and excited yells started. 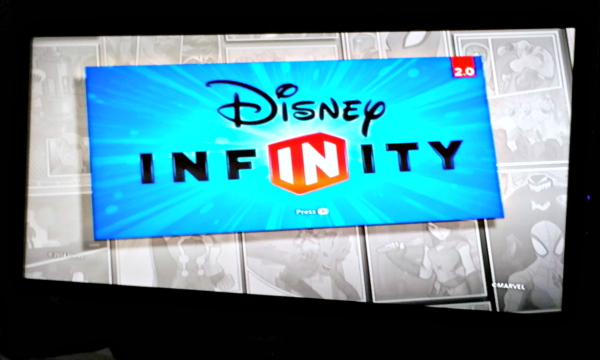 The very next screen had my girls excited! They were worried seeing the Marvel Super Heroes that this was going to be a “boy game” … until they saw Black Widow front and center! No more concerns about this starter pack being for boys eyes only. 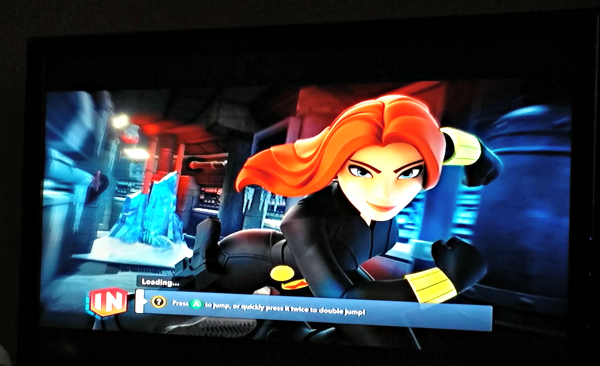 If your kids played the original Disney Infinity, they may already know the tips and tricks on how to play. If not, or if they need a refresher, you will find some hints at the bottom of the screen starting up and throughout the game. This is great for my son who can read, and he reads them to his sisters as well.

If you are concerned about your kids not being familiar with Marvel Super Heroes enough to enjoy this game, I encourage you to let those feelings go. The thing about Disney Infinity games is that they are fun, simply because they are made for fun. Knowing the characters certainly does make it more interesting (as is the case with my son) but the game can still be enjoyed without that knowledge.

What we have learned…

Johnny and Joley have been playing the Disney Infinity 2.0 for a few weeks now. They are happy to be able to use their Disney Infinity 1.0 characters and power discs with this new game. But, we are all a bit disappointed that they can’t use the previous play sets as the girls still really enjoy them. It isn’t a huge deal though. We will just be switching the Infinity Base to the one we want to use the play sets for.

So, what do we think about Disney Infinity 2.0?

We love it. Johnny is very excited about being able to add more characters to this game and has a few in mind already that he wants. We definitely are looking for the Hero 6 characters since that is such a popular movie out right now. But, there are some old favorites on our list too, like Donald Duck!

Johnny is happy with the new abilities some of the characters have. For example, he enjoys making Thor fly all over the game.  He is ready to get more characters and see what abilities they all have.

My personal opinion on this is that it is a great extension of Disney Infinity 1.0. Where Johnny was interested in a younger set of characters last year (like Buzz Lightyear for example), he has grown a bit and is also interested in the older-kid interests, like the Marvel Super Heroes. He isn’t turning his back on the old characters though and still plays with them, especial the Lone Ranger characters. He has expressed interest in getting the characters for 1.0 that we don’t have still, so both games are going to be played with still even though we now have the 2.0 version. It just feels to me that Disney Infinity 2.0 has grown with children that started with 1.0 and I love it.

Who is Disney Infinity 2.0 appropriate for?

For your reference, Joley is 5 years old and can play this game without problem. Johnny is 8 and probably “gets it” a bit more than her. They both can play at the same time and either work together or play independently. Johnny likes to torment her by shooting her or throwing her and laughing hysterically, to which she gets angry and yells “no fair”, but this is just part of the fun. There isn’t much that can get these two kids to sit down and play together so I am really pleased with that.

Do we recommend Disney Infinity 2.0?

We completely, 100% recommend Disney Infinity 2.0.  I have seen great deals on the starter packs so I encourage you to look around before purchasing. Most places I have seen the price set at $74.99 without sale and as low as $39.99 on sale.

Where to buy Disney Infinity 2.0?