Disclosure: We received the products mentioned from Activision. No monetary compensation was received and all thoughts and opinions are my own. 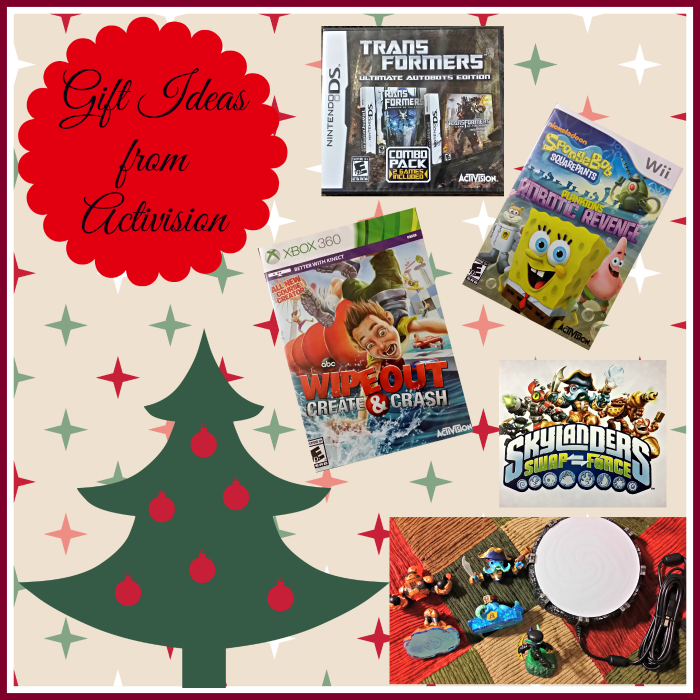 The one gift Johnny wanted this year is the Skylanders Swap Force. He couldn’t think of anything else off the top of his head that he just “had to have”. We have the original game,  Skylander: Spiro’s Adventures and Skylanders Giants and the games keep getting more and more exciting. With each new series, there are new characters and new scenes to play in but the old characters work too. Sylanders Swap Force is unique in that the new characters can swap body parts! You can have the top from one and the bottom of another making the perfect movement and weapon choices!

Skylanders Swap Force can be bought for the Wii, XBOX 360, and Nintendo 3DS. The very best part of these games though is that the characters work across platforms and the game is a little different across them too! With each starter set, you get the video game, the Portal of Power, 3 Skylanders, 3 trading cards, and a poster. These are sure to be a hit with both boys and girls, young and old!

If you have ever seen the show Wipeout, you will love this game! Available for Wii, Wii U, XBOX 350, and Nintendo 3DS, this game is suggested for kids 10 and over. You can play the already-created games or create your own and share them with your friends. You can expect a lot of competition with this game and a lot of fun family time too.

For the XBOX 360, you can use the Kinect or choose not to. With 12 episodes and over 50 obstacles, this is a game that isn’t going to get played and set aside. You can play in party mode too and have the whole family involved too!

This game is a big hit among SpongeBob fans! It is available for PS3, Wii U, Wii, XBOX 360, Nintendo DS, and Nintendo 3DS. With this fun game, you can play as 5 characters…. SpongeBob, Patrick, Squidward, Sandy and Mr. Krabs and can switch between them as often as you like! This is truly a game to play with friends too. You can jump in and out of gameplay at any time with 3 of your friends. With local multiplayer, if at least one player continues, so does the game!

This is suggested for everyone over age 10. I would see no issues with letting Johnny play it but use your own discretion with that. I think boys and girls would enjoy this game!

Johnny loves Transformers so I know this game would be a huge hit with him. It is available for Nintendo DS and Nintendo Wii.  There are two games in this set, Dark of the Moon and Revenge of the Fallen. In the first, you can play as both Autobots and Decepticons. Your job is to put a stop to Megatron’s plans to unleash an ultimate weapon on earth. In the second, your mission is to take down Megatron and the Decepticons. Experience both of the marquee campaigns from the movie in addition to missions unique to this game. This game is also suggested for everyone 10 and up. This game is sure to provide hours of fun for any Transformers fan you know!

Be sure to check out these and all the fabulous games from Activision this holiday season. I can’t even begin to tell you how excited my kids are when they get new video games and we love them all!

A huge thank you to Activision for sending these fabulous games to ToBeThode.