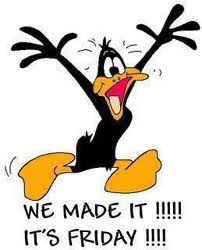 This has been one LONG week. I haven’t slept well in days because of pain and I was out of the house several days this week doing things… being busy. Anytime I am busy, my pain is worse. At this point I am counting down the days until I see the doctor again. Being in chronic pain is exhausting. For those interested, the official count is 11 days!

We have no major plans this weekend. I have had the day off with my kids so we have just been hanging out. I am thinking about going to yoga tonight because I need it. My class is officially over so I am going to start going to sessions as I feel like it. I am looking forward to relaxing and hopefully moving my joints enough that they stop hurting.

Right now, I am going to lay down with Jemma for a bit. I am on a mission to find a TV show on Netflix that I like as much as Scandal, Orange is the New Black and House of Cards. I started watching a show called Revenge last night and it was okay but not on the same level, at least as far as getting my attention. We are going to be dropping cable soon because we can’t afford to pay for it so I am hoping to find some good shows on Netflix to keep me occupied. I only watch TV when the kids are sleeping and at night when I can’t sleep so it doesn’t have to be kid-friendly. Any suggestions? (I have already seen Walking Dead and Breaking Bad. We’ve watched them from the beginning.)

Alright, off for now. I have some fun stuff coming up for you. Be on the lookout for a $50 Babies ‘r Us gift card, some DVD reviews and giveaways, and more!

Have a great weekend!