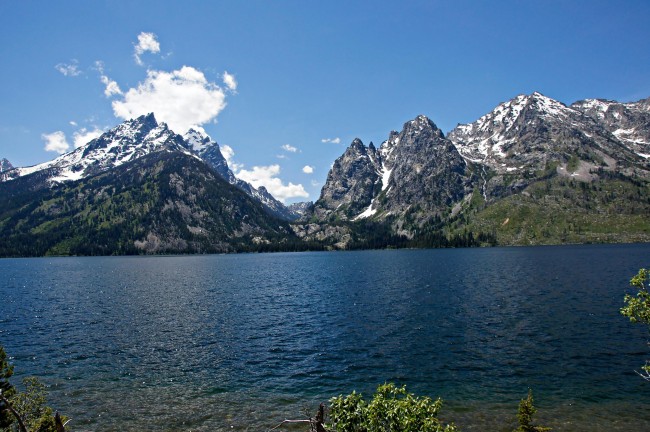 No doubt about it: Jackson Hole ranks among the world’s most gorgeous valleys. Here, the remarkably steep eastern front of the Teton Range makes a truly jaw-dropping mountain wall; here, some of the greatest concentrations of large mammals in the temperate world make their home in a glorious Rocky Mountain wilderness. And from deep winter to the height of summer, there’s something to do for the whole family all across the calendar.

If you’ve never been to Jackson Hole before, here’s a little guide to orient you. Your first time to the valley is going to be magical–and it’s certainly not going to be your last.

You can fly to the Jackson Hole Airport from more than a dozen major U.S. cities, although many visitors come by car: Anyone doing a classic national-park road trip through the American West should include the valley, perched alongside two stunning parks, on the itinerary. From sylvan campgrounds to in-town hotels like the White Buffalo Club, there are many different places to stay while enjoying Jackson Hole’s pleasures to the hilt.

“Hole” is an old fur-trapper’s term for a mountain valley. Jackson Hole sits between the Teton Range to the west and the Gros Ventre Range to the east, anchored by the meanders of the south-flowing Snake River (which has its headwaters on the Yellowstone Plateau just north). The biggest community in the valley is Jackson–often but erroneously called Jackson Hole–which sits in the southeastern corner between East Gros Ventre Butte and Snow King Mountain.

Grand Teton National Park occupies much of Jackson Hole as well as the crest of the Teton Range, while Yellowstone National Park sprawls due north; the John D. Rockefeller, Jr. Memorial Parkway links the two parks. Just north of Jackson lies the National Elk Refuge, famous as the wintering ground for thousands of elk. And much of the surrounding mountain country not managed by the National Park Service falls within the Bridger-Teton and Caribou-Targhee national forests.

Regardless of the season, Jackson Hole is an outdoorsperson’s mecca. The Jackson Hole Mountain Resort, Grand Targhee, and Snow King deliver world-class skiing and snowboarding, while hundreds of miles of wintry trails beckon to snowshoers, snowmobilers, and cross-country skiers. You can also take a sleigh ride–the National Elk Refuge is the preeminent place for this–or try your hand at dog-sledding or fat-biking.

Then there’s all the hiking, backpacking, boating, and fly-fishing to pursue from late spring through mid-autumn. Jackson, Jenny, and other local lakes are perfect for canoeing and kayaking, while whitewater rafters can rocket through the mighty Snake River Canyon south of Jackson Hole.

Some of the world’s best wildlife-watching lies in and around Jackson Hole, especially in Yellowstone, Grand Teton, and the National Elk Refuge. Besides elk, there are moose, bison, mule deer, mountain goats, bighorn sheep, pronghorn, coyotes, pumas, bobcats, black bears, grizzlies, and gray wolves to scout for–plus a plethora of birds, including such scene-stealers as bald eagles, sandhill cranes, and American white pelicans.

Magnificent scenery and varied outdoor adventure may justly anchor many a Jackson Hole getaway, but there’s much else to appreciate here. Jackson offers excellent shopping, dining, art galleries, museums, and other entertainment, not to mention the classic photo-op of its Town Square arch made of interlocked elk antlers. Besides year-round staples like the Jackson Hole Playhouse and the National Museum of Wildlife Art, the valley hosts a number of noteworthy annual events: Old West Days, the Jackson Hole Rodeo, the Jackson Hole Wildlife Film Festival, and the Grand Teton Music Festival, to name a few. And the summertime Jackson Hole Shootout in Jackson’s Town Square is a surefire hit for anyone entranced by Wild West history.

Intrigued yet? Jackson Hole will seduce you, whether you’ve come for the ski slopes, the Old West atmosphere, or simply to take in some of North America’s most sublime scenery.

Angie McNeil combines her work as a community coordinator with the fun of regularly exploring Jackson Hole and surrounding areas. She likes to share her tips and suggestions online with anyone thinking about visiting and writes for several travel guides and tourism websites.