Peeps are everywhere right now. Well, it seems they are available for every season, but they are especially popular during Easter. Today I am sharing one of my favorite cupcakes; a Peeps Cupcake with cream cheese frosting. What I especially love about this one is that it uses sanding sugar and that makes everything so pretty! You can use whatever color you like but we love the pink used for these. I think these would make an absolutely adorable addition to your Easter table. What kid (or adult) wouldn’t love to have one of these cupcakes for Easter dessert?!?

Peeps in pink or Yellow

Preheat the oven to 350 °F and line a cupcake/muffin pan with cupcake liners.

In the bowl of an electric mixer, beat 2 eggs with the whisk attachment on medium speed (15-20 seconds).

Add vanilla and oil and beat on medium speed (1 minute)

Reduce mixer speed to medium/low and slowly add about half of the flour mixture.

Beat until just combined and smooth, scraping down the sides of the mixing bowl

Add the marshmallows and fold into the mix

Pour batter into a lined muffin pan.and fill to about ¾ full

Let them cool in the pan for a couple minutes, then remove

Cooks Tip: For best results with whipped cream, freeze your mixing bowl and whisk attachment 10-15 minutes before using. Also keep the heavy whipping cream refrigerated until ready to use.

Whip the cream on high speed (1-2 minutes) until fluffy.

In a second mixing bowl, beat cream cheese and powdered sugar (start on low speed unless you want to be standing in a cloud of powdered sugar), then beat in ½ tsp vanilla extract.

Fold the whipped cream into the cream cheese mix. Keep it covered in the fridge until ready to use on these cupcakes.

Hold the cupcake in one hand and grasp the pastry bag in the other.

Now start on the rim of the cupcake and begin to squeeze the icing onto the cupcake in one movement ice the cupcake all the way around and move to start the second layer by placing the icing on the inner ring of the layer you just did. Complete the process till you closed the gap.

Now twist the icing on the top to make a peak. Similar to how you would get frozen yogurt

Take your freshly iced cupcake and dip it in the bowl of sanding sugar lightly twisting to cover all areas.

I wanted to show you the decorating part of this recipe specifically. That is a lot of words for a simple idea. 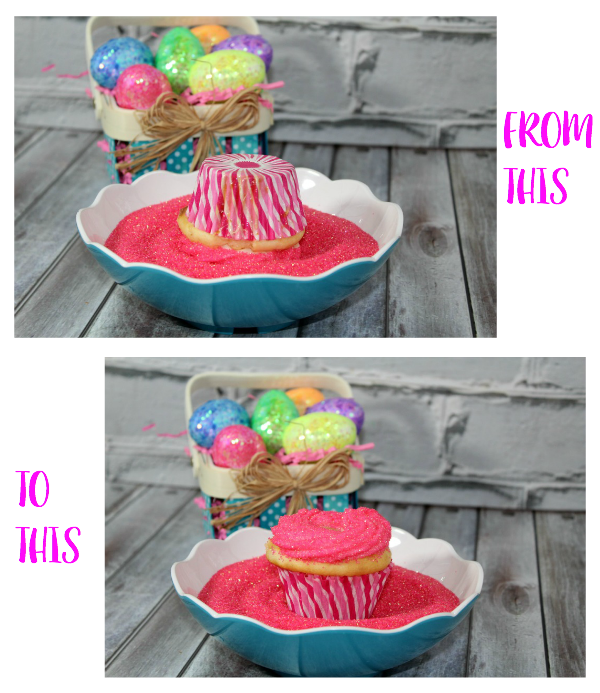 I hope you enjoy this delicious dessert recipe. Be sure you use a good cupcake pan when cooking so you have easy clean up! You all know how much we love our cupcakes around here but this is one of my favorites!

What is your favorite kind of cupcake?