That’s right!  Disney’s Emmy Award-winning hit series Phineas and Ferb, the #1 animated show among tweens for the past 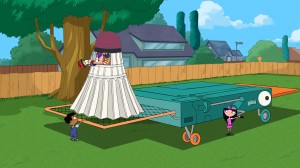 3 years, is about to debut a new movie.  On Friday, August 5th at 8pm ET/PT on the Disney, you can catch the new sure-to-be-fabulous movie.  It is also going to be debuting on Disney XD on Saturday, August 13th at 10am ET/PT.  So, what are Phineas and Ferb going to be up to in this movie?  They are going to go on their biggest journey yet… into another dimension! 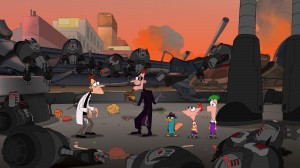 My kids love Phineas and Ferb.  Both my 5 year old and my 11 year old are both big fans and are always looking for Phineas and Ferb on TV.  They are always singing songs and using fun phrases from the show.  When I told them that a movie was coming, they were so excited and are counting down the days until its premiere.

There are some other fun activities coming up with Phineas and Ferb. 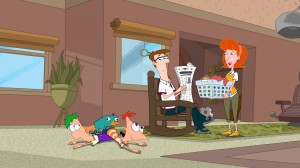 The first was today in New York City (my favorite place!) where Disney launched “Perry the Platy-bus on Tour”.  This features a 27′ long customized, rounded aluminum Airstream trailer outfitted stern-to-stern as Phineas and Ferb’s teal-colored pet platypus.  Don’t worry though because today was the launch starting the coast-to-coast journey from New York City to San Diego’s Comic-Con International (July 21-24) and the Disney D23 Expo in Anaheim (August 19-21).  During the tour, you are invited to come aboard, play the exciting new Unity 3D online game, “The Movie Game:  The Dimension of Doooom!” and video console games, sing Perry-oke and much more fun too!  The best part… there is no admission charge! 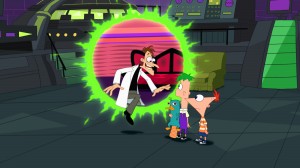 Keep an eye out for the soundtrack available August 2nd , the video game inspired by the movie for the Wii system, Nintendo DS (we will be looking for this one!), and the Playstation 3!  You will also find a junior novel, joke and novelty book, and an official 96-page magazine.  The most exciting (according to my kids) is the “Phineas and Ferb: The Best LIVE Tour EVER!” which is going to be playing in more than 80 hometowns across the U.S.

Again, don’t miss the debut of Phineas and Ferb: Across the 2nd Dimension on August 5th at 8pm on Disney channel or August 13th at 10am on Disney XD!  I know we will be watching!

Disclosure: We were sent Phineas and Ferb promotional materials from Disney Channel through Child’s Play Communications in exchange for this post. All thoughts and opinions are my own.