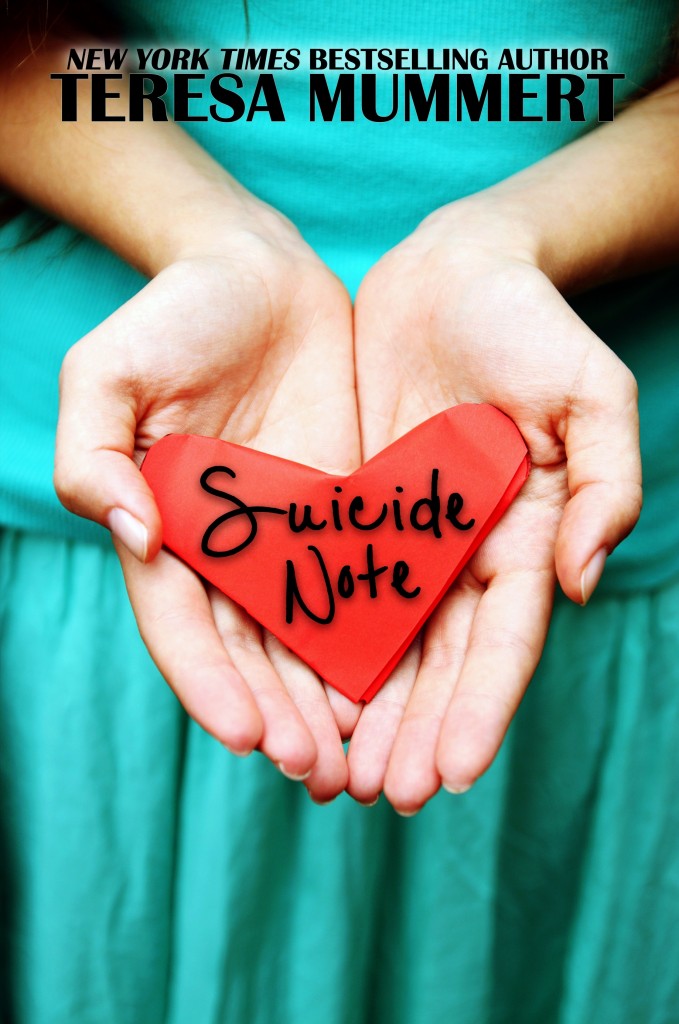 I consider myself very lucky to work with and know some amazing authors.  Today, I have a review to share with you about Suicide Note from Teresa Mummert.  I will start by saying that this book contains no act of suicide.  I know that many may think that by the title, but it doesn’t…. and believe me when I say that there truly is a happily ever after.

A soldier returning for mid-tour leave decides to stay with a cousin in Maine, after his fiancé leaves him for someone else while he is away at war. His cousin is going through his own devastation and is struggling to pick up the pieces and move on with his family. As they try to help each other through the pain, Shane’s path crosses Jenn’s and he soon learns that everything happens for a reason.

**This review may contain spoilers**

We start this story with Jenn. Jenn is dealing with a betrayal like no other. People she trusts hurt her beyond what any normal person could take. But, Jenn is a fighter throughout this story and blows my mind with the strength she has.  When I would be hiding away from the world, Jenn embraces her life in a way that I could only hope to do in similar circumstances.  She cares about her career and even the family that, in my opinion, does not deserve her.  She does something in the beginning that changes the way everyone in the book behaves… she writes a note.  This note gets into the hands of Shane by accident and it leads to many uncertainties and quite a few questions among the characters.

Shane is at war.  He is a soldier that was betrayed by his soon-to-be wife and he has to figure out how to move forward.  On a layover in Maine, he decides to stop and visit his cousin instead of going to North Carolina to deal with the fall-out of his broken relationship.  This decision is the one that leads him to have contact with Jenn.  Their situations are so similar and yet they are both afraid to let others in.  Shane has to go back to war but chooses to not share this information with Jenn until the very end of his leave, despite knowing it will hurt them both when he leaves.

Shane and Jenn have a number of adventures together during his time in Maine.  They spend time getting to know each other while still keeping parts of their life secret.  The note comes back into play when Jenn finds it.  This suicide note may not be all it was thought to be though and while it was the reason for Shane getting to know Jenn, it certainly isn’t the reason he stayed.  Shane has to go back to war and throughout the story you wonder what is going to happen.  My heart was breaking for both him and Jenn trying to figure out if they will make it to their happily ever after.

May and Jake, Shane’s cousin and sister-in-law have a strong role in this story as well.  I loved May.  She is the sister everyone wishes they could have.  Jake is also Jenn’s boss, one she didn’t care for at the start of the story.  I loved that the family takes Jenn is as their own as time goes on.  They opened their arms and home to her.

I hate reviews that give away a ton of spoilers so I will leave it at that.

My thoughts???  With one word, wow!   I loved, loved, loved this story and the characters.  I fell for Shane like I tend to do.  He is sweet, caring, and although troubled, he manages to sneak his way into your heart and hang on.  I wanted him and Jenn to be happy.  That’s it.  Just happy.  Of course, happy together was what I was hoping for.  But, Teresa Mummert wrote such a beautiful piece of fiction that I would have been pleased just that they were happy at all.  I cried when Shane had to leave.  I cried when he was given some great news (that I won’t spoil for you).  I cried again at the ending.  Basically, I cried a lot.  It was just.that.good.   This is a five-star read if there ever was one!

I want you to read this and be as surprised as I was by what happens.  I want you to feel the emotions I felt while reading this story.  It truly is a great read and one that I am so glad to have spent my day engrossed in.  I encourage everyone to check out Suicide Note on March 15th when it is officially available.  There are no preorders available.  I promise you the wait is worth it.  You will love this story!

Where to find Suicide Note

Because I loved Suicide Note by Teresa Mummert so much, I am going to give away one e-copy of it.  I want to share this with one of you!  Keep in mind that it won’t be available until March 15th!

I will be giving away one e-copy of Suicide Note by Teresa Mummert!

Disclosure: I received an ARC of this novel in exchange for my honest review. All thoughts and opinions are my own. The book giveaway is from me, Stefany at ToBeThode and will be awarded via email to one winner on March 15th when the novel is released.