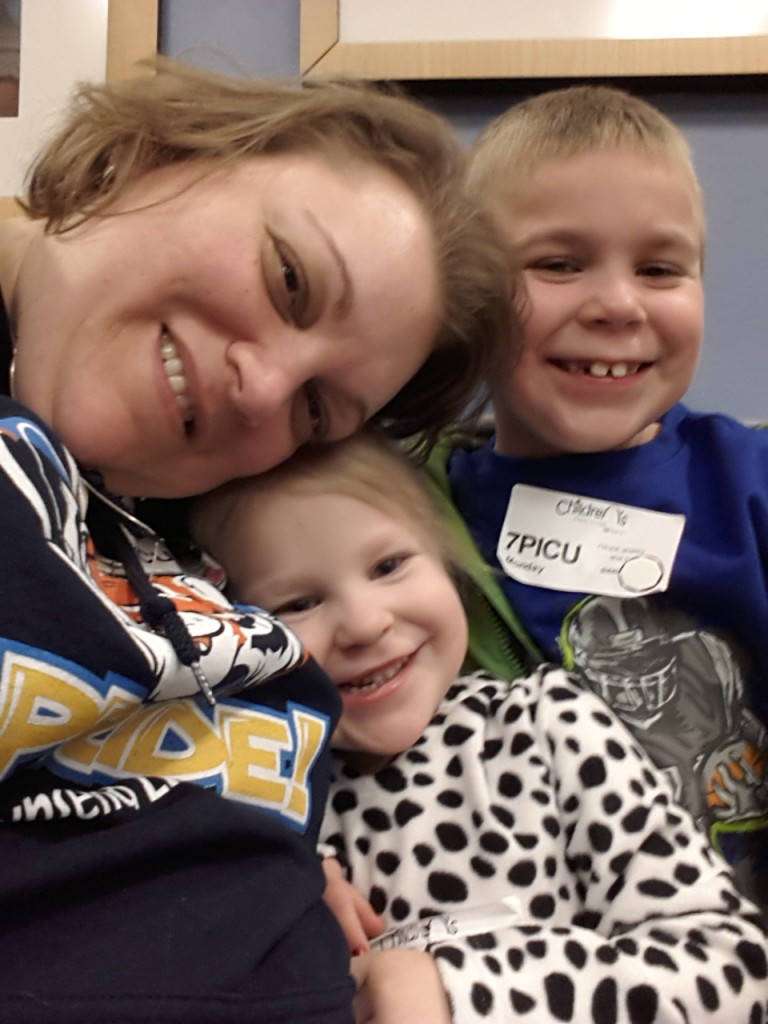 Hanging out with my big kids.  It is so hard being away from them but they are doing great with my mom and dad.  I am so blessed to have them in my life to take care of my babies for us.

Wow, it has been a whirlwind of activity and change the past few days.  I left off with weaning Jemma off the oscillator vent.  Well they decided to make the jump early (were planning by Wednesday) Monday morning because she had so much stuff in her chest that they could not get to with the oscillator vent.  They needed airway clearance and the only way to get that was to switch her over to a conventional vent.  With that they could suction more and better.  I was nervous.  Very nervous.  Monday morning I sat in her room full of anxiety.  I decided that I needed some God time.  I asked for a chaplain to be called.  Originally I was asking for a cross for Jemma’s room but was told that they don’t have any standing ones to just use.  I mentioned that I wanted to get my rosary and pray that and the chaplain brought one up to me that another family had left.  I sat down and prayed the rosary with the guidance of an app on my phone.  I just can’t concentrate!  Well, it truly was a bit of a miracle in my mind.  A sense of peace came over me.  I asked our social worker to have a priest come up and bless Jemma again.  The same priest I saw on the floor for communion shortly after our stay began came to the ICU. He blessed my rosary and the small hanging cross the chaplain gave me.  Then he prayed and blessed Jemma.  I was no longer anxious and was ready.  Let’s do this! 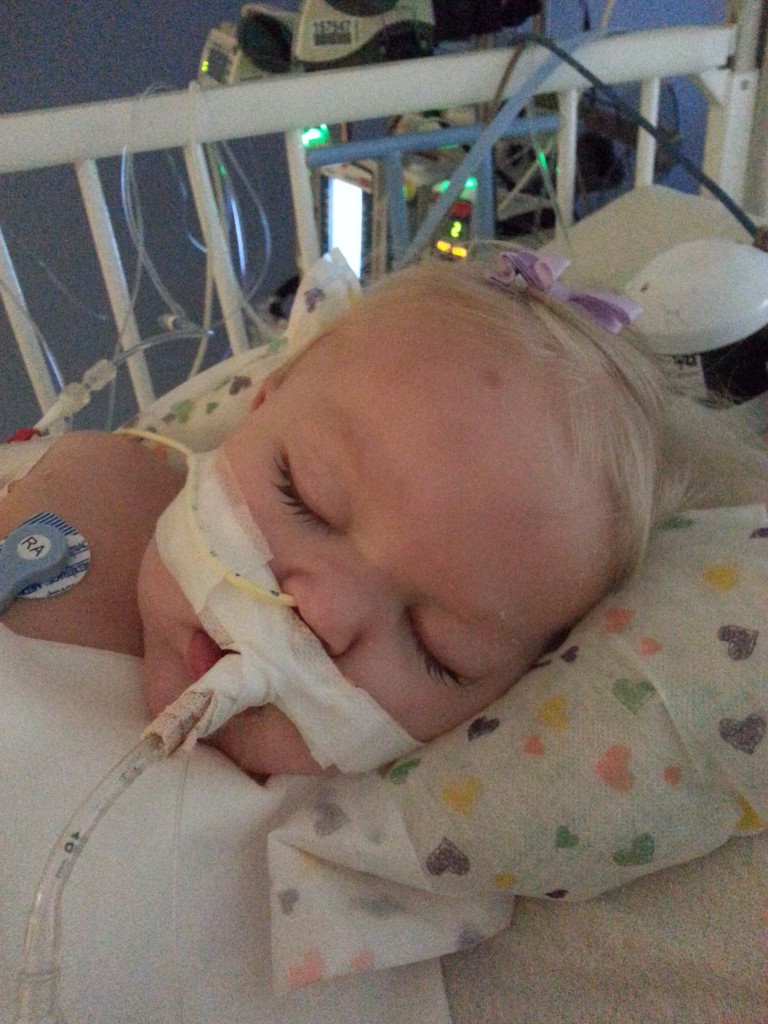 Sweet girl.  She is looking so much better!

They switched Jemma over to the new vent with no problems.  They adjusted a few settings and started getting a lot out of their suctioning.  They started weaning her later that day because she was doing so well.  My little fighter just kept fighting.  She had a chest xray at 11pm that showed a little change (for the better) and I was feeling good.  She seemed to be more comfortable and actually looked to be taking breaths versus the “wiggle” of the oscillator.  I talked to Mike and we decided that the kids could see Jemma on Tuesday as long as all went well.  They removed the oscillator from her room about 12 hours after the switch and I did a happy dance in my head.  I was so glad to see it go!

When I came to her room Tuesday morning, I had a note from our favorite nurse that said to ask to see the chest xray from 11p and then the one from 6am on Tuesday.  Jemma’s nurse for the day shift didn’t even have to be asked.  She said her and the night nurse were so excited they were high-fiving and hugged each other!  ha!  The progression of just 3 xrays was amazing.  You could see a huge change  from the oscillator xray to the second conventional one.  It was just beautiful.  They added albuterol to her meds because of some wheezing but her lungs were sounding better all the time. 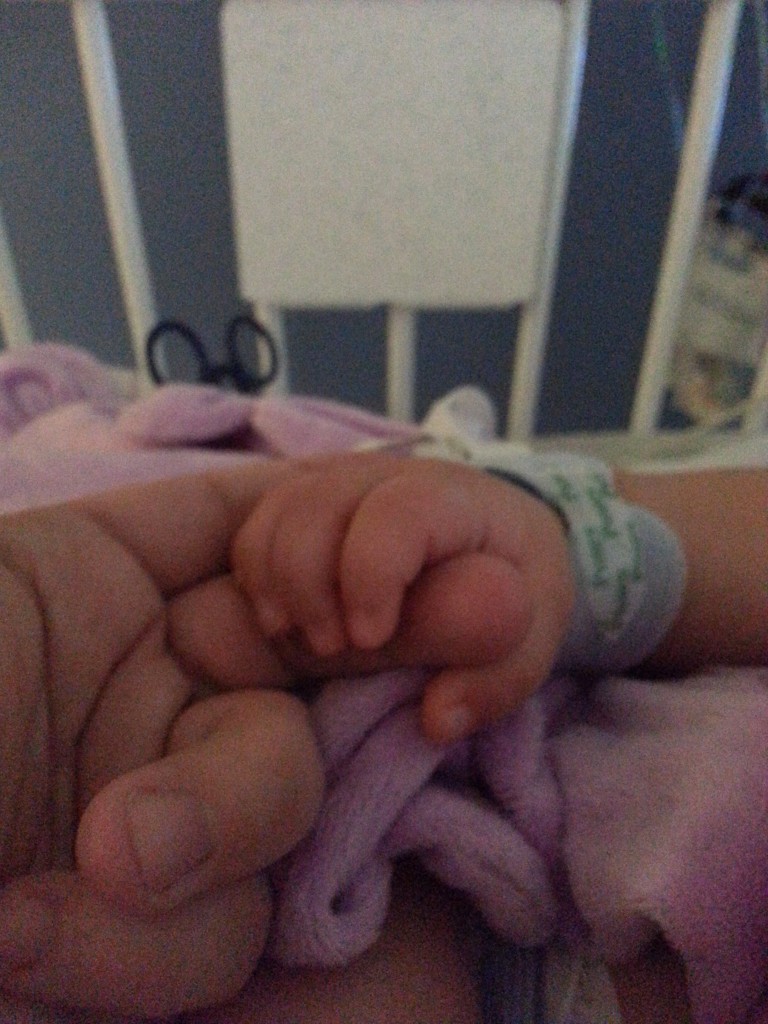 Yesterday (Tuesday) they weaned her some more and I was told I would get to hold her.  Oh my gosh.  I was crying just thinking about getting my hands on my baby girl.   That was all pushed back a bit though because Jemma was able to finally get that PICC line (central line that can stay in longer than the peripheral ones and no more pokes!).  The process to do a PICC is much different than I am used to.  The nurses come in and use ultrasound to find a vein.  After that, they decided to put Jemma on a fluoroscope bed so they can see exactly where the line goes.  They had to have several people to help get all her tubes and lines up and someone held Jemma.  One bed was wheeled out from under her and another wheeled in.  She was placed on the bed and the process began.  After they inserted the line, they used xray (basically) to see where the line is.  Since it is such a small vein and line, they added some contrast and got it in place.  Changed beds again and she was good to go!

They removed her IJ (Internal Jugular) line yesterday afternoon right before xray came because the IJ and PICC tips were very close together.  They wanted to make sure that the IJ being pulled didn’t move the PICC.  It was all good.  They continued to wean the conventional vent.  Her paralytic med was turned off late morning on Tuesday.  She slowly started moving and coming around.  I said that I was going to go for a few minutes, gave her a kiss, and walked out.  The respiratory therapist stopped us in the hall and said to come back.  She said Jemma just popped her eyes open.  I came back in and her little brown eyes were looking right at me!!!!  She is still very sedated but she moved her eyes to see me and her daddy.  It was a beautiful thing and had tears of joy for the first time in weeks.  She also opened her eyes for my mom and dad last night.  Since then, the paralytic has worn off and she has been restrained to keep her from pulling her tubes but I hold her hand and love all over her when I am next to her. 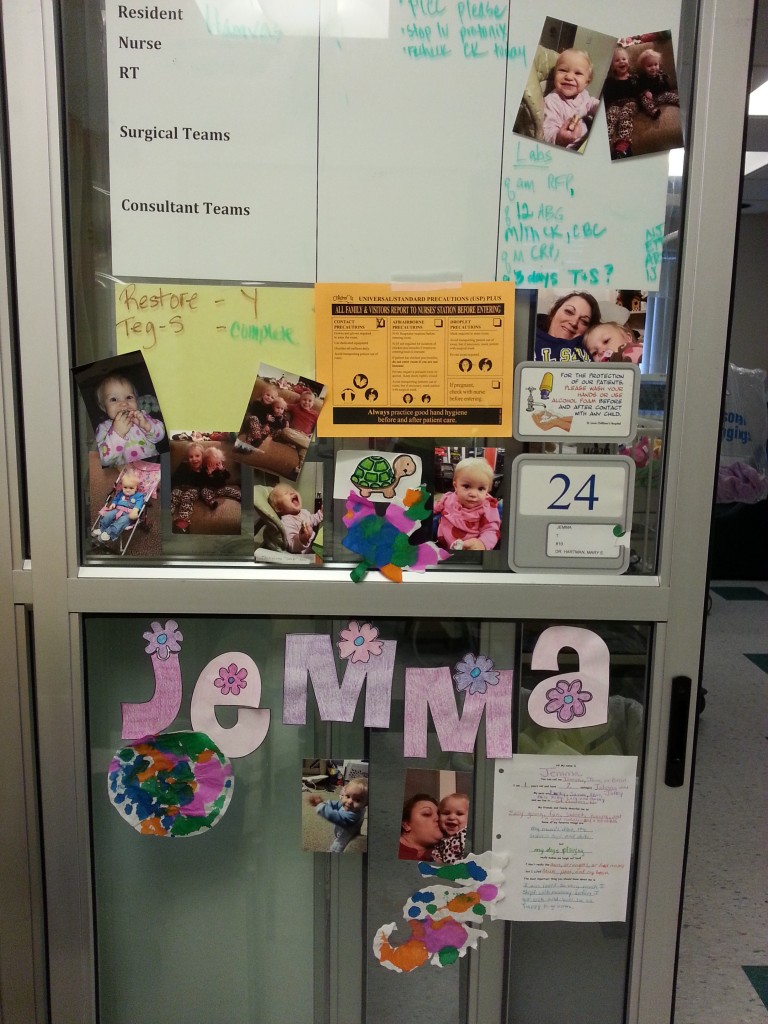 I’ve updated her door to the ICU with pictures so the doctors and nurses can see her as a healthy little girl.  There is some art from Joley on the door too!  The kids were greeted with this when they came to the ICU the first time.

Brother and sister came up last night (as they do most nights to see me).  The Child Life Specialist made a little booklet of pictures of Jemma’s room with some explanation of what things were in her room.  I showed them the book and they seemed to be okay.  Joley was most concerned with the tube in her nose and was grossed out that she had food going through her nose!!  ha!!!  They were told she is very sleepy because of her medicine.  They came back to the room with us and Johnny read Jemma a book, they talked to her, touched her and did very well.  They were just so happy to see her.

I asked the night nurse if it would be possible for me to get to hold my baby again last night.  It was all pushed off because of the PICC placement but I was okay with it.  I just wanted to get my hands on my little girl.  Mike also talked to the fellow on shift because it really was so important to me.  They decided to do one better than letting me hold her.  They brought in a big bed to her room and let me snuggle up next to her.  It was wonderful.  I climbed into bed and just stared at her.  My God, she is beautiful.  Her cry is so sad because she makes no noise.  Every time I went to get out of bed last night (they won’t let me sleep with her now), she would grab my hand and cry.  Eventually they gave her some medicine to relax her for her respiratory treatment and she fell asleep after the percussions.  I dragged myself to bed.  It was a fantastic day! 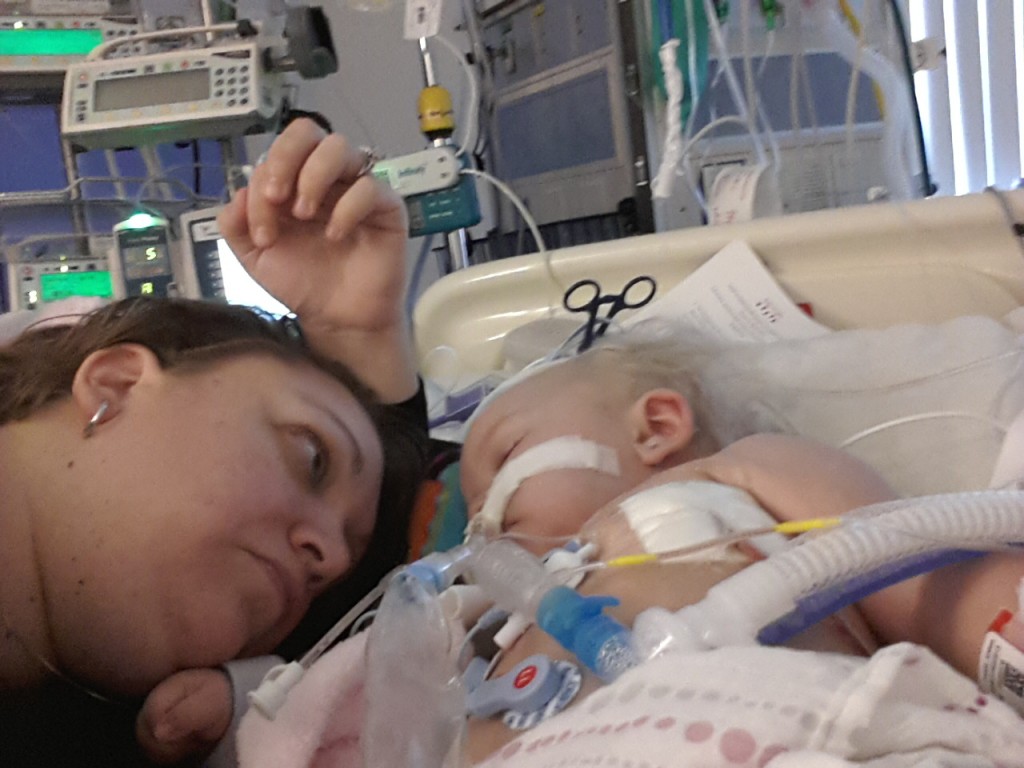 Laying with Jemma is my favorite part of my day now.  Just loving on her is the BEST feeling ever…. especially since it was 12 days since I last could do anything but touch her hands, feet, or head.

This morning I came in to her being weaned even more.  She basically (according to the doctor) is on the lowest settings they will put her on.  She is only being given 6 breaths from the machine but she is breathing over (and has been since yesterday afternoon) it and doing great.  Her saturation is upper 90s and she is just doing so good.  During rounds, her doctor said that they are going to start a steroid (precautionary and she was funny with the resident about it) to make sure there is no inflammation around her tube, they are going to start weaning her morphine, and they are going to plan for extubating her tomorrow!!!!  If she does well today and tonight, she is on target to get this tube out of her mouth tomorrow afternoon.  I AM SO EXCITED!  They are removing one chest tube today (the first one) and the other two will come tomorrow.

One antibiotic for the staph was stopped due to blood levels but she remains on one.  She also had a positive culture for trach aspirate so she is one an antibiotic for that.  Her last WBC was 14 yesterday and they only draw them twice a week now.

So today, I am just going to hang out with my baby.  I am going to lay next to her and watch some TV and just enjoy feeling her there.  I can’t thank everyone enough for all the prayers and thoughts.  It means so much to me that Jemma (and our family) have had such a huge showing of support.  She is not out of the woods so keep those prayers coming but please know that they are working and we are so humbled by the support received.  I can not thank you enough. Truly.