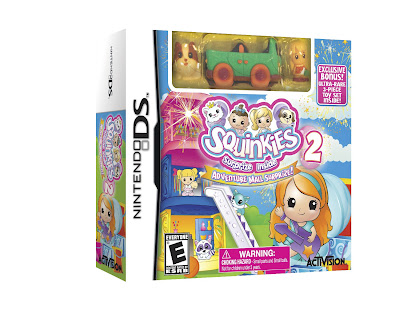 One game that my kids have loved since we first received it was Squinkies.  That is why, when Squinkies 2: Adventure Mall Surprize! for the Nintendo DS arrived, I was not surprised at their excitement.  They dug right into the box and pulled out their new fun Squinkies and then argued over who gets to play the game first.  Yes, argued.  *sigh*

Johnny and Joley both play this game although Joley doesn’t really know what she is doing.  I have seen my husband playing this one too and he admits that it is fun.

Here is what you have to do… invite the Squinkies scattered throughout the newly opened Adventure Mall to the Squinkies party.  You have to find them first though.  You do this by exploring the game’s four locations: the Aquarium, Food Court, Wedding Castle, and Amusement Park.

Along the way you meet hundreds of friends – some of whom are familiar faces along with plenty of new pals. There are over 50 playable characters so you get to talk to everyone you see and invite them to the party! Johnny and Joley like to collect Magic Coins and use them to unlock ten super-rare Squinkies at the Gumball Playhouse.  That seems to be the goal of my kids so they at least have the idea down!  Joley likes how colorful the screens are and I have to agree.  It is a pleasant game to look at!

Squinkies 2: Adventure Mall Suprize! is available now for Nintendo DS.  This game is rated E for Everyone by the ESRB.  For more information, visit www.activision.com.

Disclosure: We were given the product mentioned for the purpose of review. All thoughts and opinions are my own.