Disclosure: I am sharing this information because I liked the music of this band. A small gift will be given to me in thanks for sharing this web app. All thoughts and opinions are my own. ToBeThode is not responsible for giveaway or distribution of prizes. 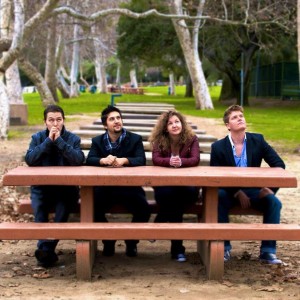 Let me introduce you to a new band… this is Huck Walton and the Waltone’s.

Huck Walton is the only offspring of Broadway star Ann Morrison. Huck spent a childhood filled with professional acting, dancing, and singing, As he entered college, he put his focus directly towards writing and performing his own music. After a couple years of traveling on tour in a guitar duo, Walton moved to Los Angeles with the aspirations of forming a band. He believes firmly that even singer-songwriters should have a set band to interpret the music.Huck was introduced to Anne Seidler (Music Director, Keyboardist, and best friend) three years ago. Together they began to organically develop the sound of the band with a number of other musicians coming and going. The act started to take shape a year in when bassist Mike Marigliano joined the group permanently. Huck Walton & The WallTones became a band eight months ago when the sought after Anthony Sonetti took to the drums. It was around this time that producer Bruce Vanderveer (Sony/ATV) picked up the WallTones and crafted the first of their singles.

I listened to the two singles on iTunes today and found the music to be funky… and fun. I liked it! So, I decided to share them with you. But, there is more than just my love of music that I want you to know about today.

I want you to have a chance to not only win their music, but a chance to win an iPad Mini too!  All you need to do is check out the Band Web App below. Click “sign up” and enter the information (include ToBeThode in your entry). One winner will receive the entire WallTones’, iTunes Single Pack (including an unreleased track and exclusive pdf booklet) as well as the lifetime redemption code for 20% off  “Official Band Merchandise”. Finally, the grand prize of an iPad Mini is up for grabs! If you listen to their music and like it, be sure to share it with your friends (you can do that directly from the widget).

One last thing… whether or not you submit for the contest, don’t forget to download your free live single from the band! Click the ‘Pay With A Tweet’ button below to receive your song.