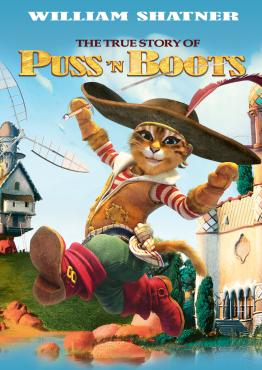 The newest excitement among my children is the movie Puss ‘N Boots out in theaters now.  Thanks to Phase 4 Films, they now know the true story behind the story of Puss ‘N Boots.  Out on DVD on October 4th, you can now find The True Story of Puss ‘N Boots, an animated movie that is true to the original story based on the famous Puss ‘N Boots character by Charles Perrault.

This classic children’s tale tells the story of a young farmer’s son who inherits a strange talking cat with magical boots. With his cunning wit, Puss helps him win the heart of the Princess while battling devious suitors that are after the throne.

While I love the message of this film, accomplishing your dreams no matter who you are, my kids were not big fans of it.  I think they may have been expecting something more like what they see on commercials but neither could really say why they didn’t care for the film.  If you are interested in the true story before, or even after, seeing the film out in theaters, I would recommend this.  But, if you are going to share it with your children, be sure to tell them that it is not what is showing in theaters to avoid any confusion.

The film stars Emmy and Golden Globe winner William Shatner as the voice of Puss.  It is available on DVD for the suggested retail price of $19.99.

Disclosure: We were given the product mentioned for the purpose of review through Team Mom. All thoughts and opinions are my own.