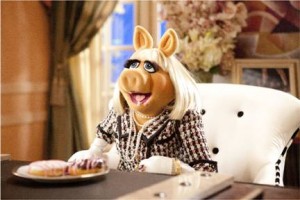 So by now you probably know that I am Muppets obsessed!  In fact, I am eyeing these fantastic Muppets edition finger nail polishes I love them so much.  It is one of my favorite movies we have seen lately!  Because I loved it so much, I wanted to share some fun facts that I just received about the movie.

Again, a huge thanks to Disney for inviting us to see the movie.  I encourage you all to go and check it out!
Be sure to LIKE The Muppets on Facebook